Image should be used as a guide only, it is based on predicted geomagnetic activity. Northern Lights may or may not be visible.

The two maps show the North and South poles of Earth respectively. The brightness and location of the aurora is typically shown as a green oval centered on Earth’s magnetic pole. The green ovals turn red when the aurora is forecasted to be more intense. The sunlit side of Earth is indicated by the lighter blue of the ocean and the lighter color of the continents. Aurora can often be observed somewhere on Earth from just after sunset or just before sunrise. The aurora is not visible during daylight hours. The aurora does not need to be directly overhead but can be observed from as much as a 1000 km away when the aurora is bright and if conditions are right.

The aurora is an indicator of the current geomagnetic storm conditions and provides situational awareness for a number of technologies. The aurora directly impacts HF radio communication and GPS/GNSS satellite navigation. It is closely related to the ground induce currents that impact electric power transition.

For many people, the aurora is a beautiful nighttime phenomenon that is worth traveling to arctic regions just to observe. It is the only way for most people to actually experience space weather.

Details
The OVATION (Oval Variation, Assessment, Tracking, Intensity, and Online Nowcasting) model  is an empirical model of the intensity of the aurora developed at the Johns Hopkins University, Applied Physics Laboratory by Patrick Newell and co-workers1.   The model uses the solar wind velocity and interplanetary magnetic field measured at the L1 orbit position at 1.6 million km (1 million miles) upstream from earth as input and calculates three types of electron precipitation and the proton precipitation which strongly correlate with the aurora.   An estimate of aurora viewing probability can be derived by assuming a linear relationship to the intensity of the aurora. This relationship was validated by comparison with data from the Ultraviolet imager (UVI) instrument on the NASA Polar satellite(2).

On occasion, the input solar wind data are either contaminated or unavailable.  In those instances, an alternative estimate of the solar wind forcing, based on the current Kp geomagnetic index is used to drive the OVATION  model.  When this occurs, there is no forecast lead time.

For more information on the OVATION model and aurora products, see:

In 2011, NOAA (NCEI and SWPC) developed a real-time version of the OVATION model to forecast the location and intensity of the aurora.  Machol and Redmon (NCEI) developed the real-time ovation model.   Viereck (SWPC) implemented the model and developed the graphical products to run in realtime to create aurora forecasts.

In 2013, Newell upgraded the OVATION Prime model so that it would more accurately capture large geomagnetic storms.   The original model, based solely on DMSP data, was only reliable to Kp of 7.   By adding data from the NASA TIMED GUVI instrument, Newell et al., were able to expand the model to include the larger storm values of Kp of 8 and 9.

In 2016, NOAA SWPC shared the operational OVATION code (written in IDL) with the UK Met Office in the UK.   The UK Met Office converted the OVATION model from IDL to Python.

In 2020, NOAA SWPC implemented the new version of the OVATION Prime model into operations.   This version has been dubbed OVATION 2020.

The Auroral Forecast product is based on the OVATION Prime model developed by P. Newell at the Johns Hopkins, Applied Physics Laboratory. 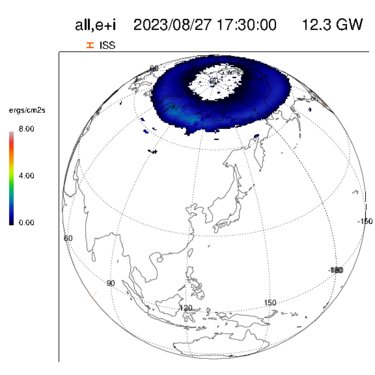 Updating the image every 120 seconds

Info
The Nowcast maps are generated by OVATION Prime - a new-generation precipitation model (Newell et al., 2010) driven by an optimized solar wind coupling function (Newell et al., 2007). The model includes seasonal variation and separates different types of auroras - monoenergetic, wave, diffuse and ion. In these maps all types are summed together - Electrons + Ions: 10Re above Earth.

Info
SSUSI remotely senses the physical and chemical processes in the Earth's upper atmosphere. Measurements are made from the extreme ultraviolet (EUV) to the far ultraviolet (FUV) over the wavelength range of 80 nm to 170 nm, with 1.8 nm resolution. The DMSP satellites are launched in near-polar, sun-synchronous orbits at an altitude of approximately 850 km. 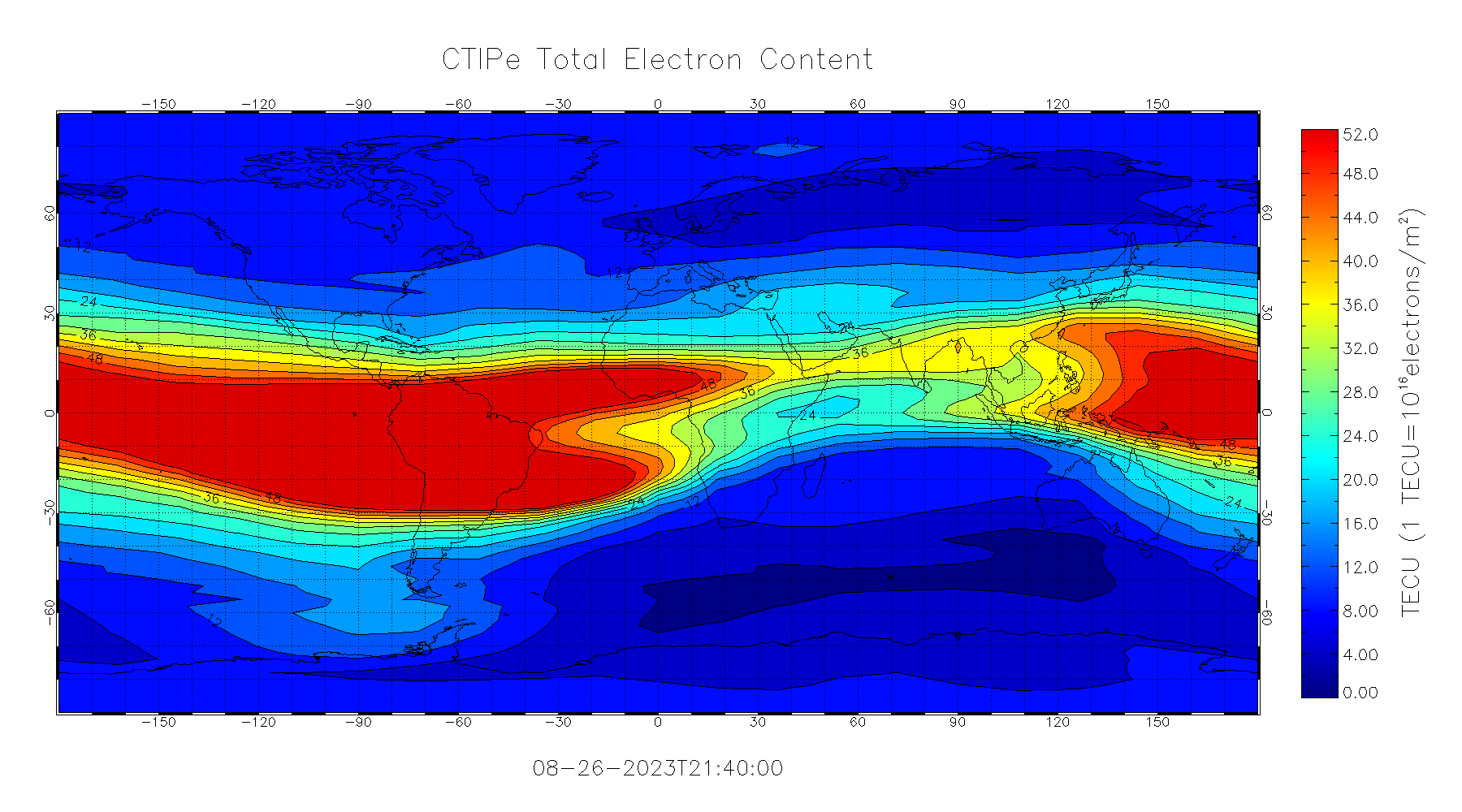 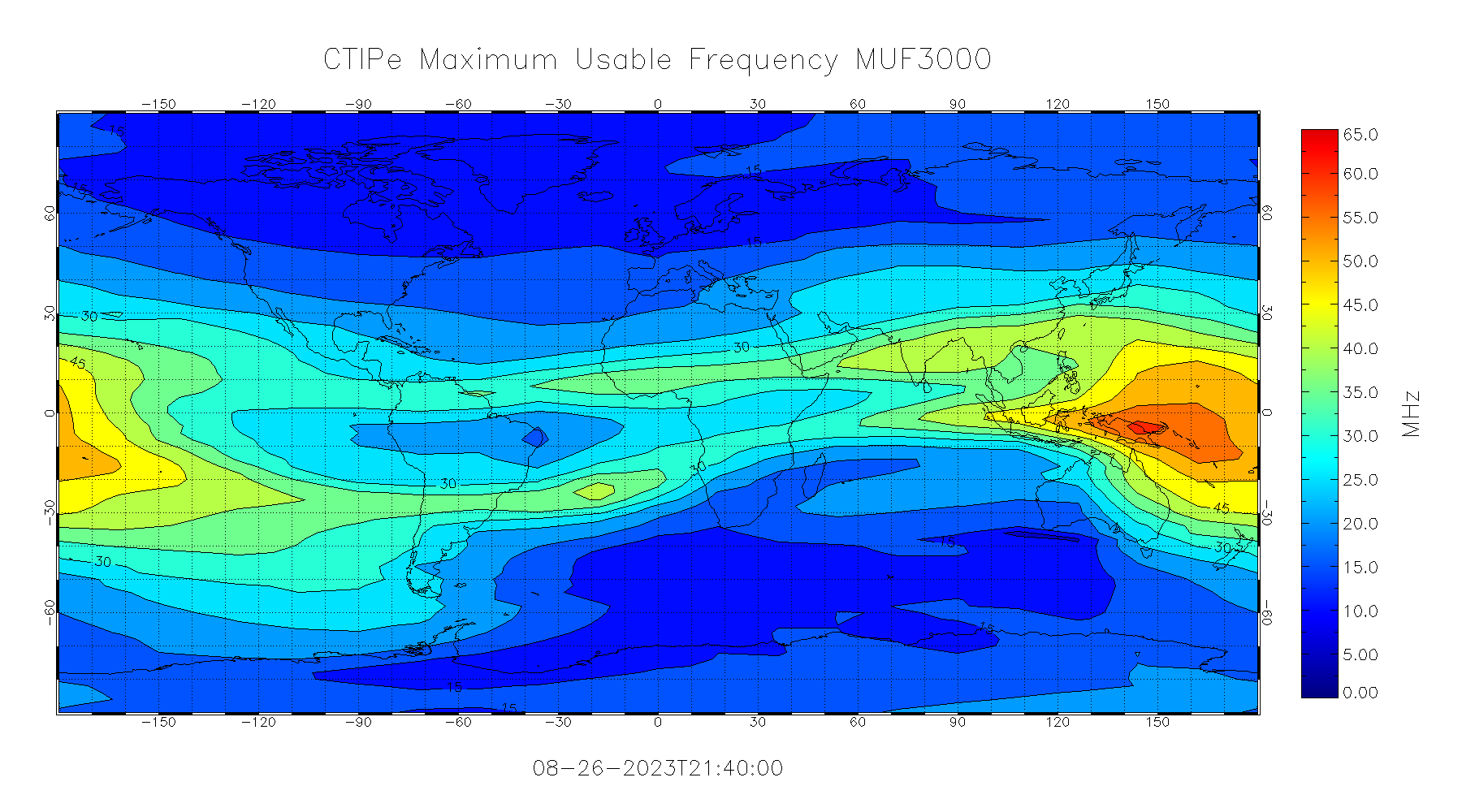 Info
The plot illustrates the height integrated electron density (TECU, 1 TECU = 1.e16 electrons/square meter) also called Vertical Total Electron Content (VTEC), vs latitude (-90 to 90 deg) and longitude (0 - 360 deg) from the Coupled Thermosphere Ionosphere Plasmasphere Electrodynamics Model (CTIPe). CTIPe is a state of the art research tool used at the Space Weather Prediction Center to study thermosphere-ionosphere phenomena in order to develop nowcasting and forecasting algorithms for space weather. The objectives are to understand and quantify the importance of the upper-atmospheric mechanisms that affect human activities and to develop new monitoring and predicting techniques.

Conditions in the ionosphere have a dramatic effect on the accuracy of Global Navigation Satellite Systems (GNSS). Geomagnetic storms can produce large gradients in TEC and the gradients can move making GNSS positioning difficult or impossible at times. The Coupled Thermosphere Ionosphere Plasmasphere Electrodynamics Model (CTIPe) model is a large numerical code that runs about 30 minutes ahead of real-time based on Advanced Composition Explorer (ACE) measurements and has the potential to forecast the state of the thermosphere/ionosphere system, including TEC variability. The model is run and the results are updated every 10 minutes, about 30 minutes ahead of real-time.

The Coupled Thermosphere Ionosphere Plasmasphere Electrodynamics (CTIPe) model is a non-linear, coupled thermosphere-ionosphere-plasmasphere physically based numerical code that includes a self-consistent electrodynamics scheme for the computation of dynamo electric fields. The model consists of four distinct components which run concurrently and are fully coupled. Included are a global thermosphere, a high-latitude ionosphere, a mid and low-latitude ionosphere/plasmasphere and an electrodynamical calculation of the global dynamo electric field. The thermosphere model was originally developed by Fuller-Rowell (Fuller-Rowell and Rees, [1980], Rees et al., [1980]) and is fully described in the PhD thesis of Fuller-Rowell [1981]. The high-latitude ionospheric model was developed by S. Quegan (Quegan, [1982]; Quegan et al., [1982]). The model of Earth’s mid- and low-latitude plasmasphere is based on the Bailey [1983] model. These first three components are described in more detail under the name of coupled thermosphere ionosphere plasmasphere (CTIP) by Millward et al., [1996]. The electrodynamic calculation was developed by Richmond et al., [1992] and was included in the CTIP model by Millward, [2001] resulting in the creation of CTIPe.

The Coupled Thermosphere Ionosphere Plasmasphere Electrodynamics (CTIPe) model runs are performed using real-time ACE measurements from the L1 point to infer the necessary inputs. Because the solar wind takes 30 - 40 minutes to propagate from L1 to the nose of the magnetosphere, the model results are displayed on the web page 20 - 30 minutes ahead of real-time. This is an average time as we do not take into account the current solar wind speed in its calculation. The F10.7 for the previous day averaged with the F10.7 average over the previous 41 days is used to drive the heating, dissociation, and ionization processes. One minute ACE data is used to generate the high-latitude electric potential patterns using the Weimer model and to infer the particle precipitation patterns using correlations between ACE data and the model of auroral precipitation patterns described by Fuller-Rowell and Evans [1987]. The input values (solar wind Btot in the YZ plane, solar wind velocity, IMF angle, solar wind density, and tilt) used for the Weimer model and to infer the particle precipitation pattern are obtained from the SWPC real-time development data base.

The latest model TEC input values are available from:  http://services.swpc.noaa.gov/experimental/text/ctipe-tec-input.txt

The latest model TEC output values are available from:  http://services.swpc.noaa.gov/experimental/text/ctipe-tec-output.txt

This file is overwritten every 10 minutes with the latest model results available. Note that the date on the first line in the file may change even if no new inputs were available and no computations were performed since the last update.

The first line is a date in the format: month, day, year, hour, minute. The CTIPe run is generally ahead of real time by 10-20 minutes. This is because it uses ACE data for inputs and it takes the solar wind about 30 minutes from the time of measurement, to affect the ionosphere.

Note that all 20 TEC values are the same at each pole.